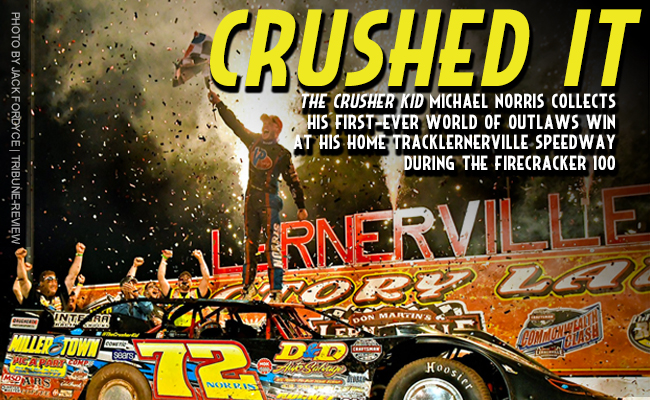 Michael Norris defeated the World of Outlaws Craftsman® Late Model Series regulars while defending his home turf at Lernerville Speedway during the second night of the 12th Annual Firecracker 100.

Norris had a perfect Friday night. He set the fastest qualifying time in Group B, collected his heat win by fending off a hard-charging Chris Madden, drew the pole position and led flag-to-flag in the 30-lap Sears Craftsman Feature event.

After climbing up on the rooftop of his No.72 Rocket Chassis powered by Gary Henry Racing Engines, Series Announcer Rick Eshelman approached Norris in Victory Lane to see what he had to say about his biggest career victory.

Norris then sighed in relief and said, “I need a second” as he tried to take in the moment of his first career World of Outlaws Craftsman Late Model Series triumph.

“This pretty much makes my year,” said Norris. “I got to thank my crew guy Dakota. I’ve never had a signal guy here and we talked about doing it forever and he was standing on the front stretch and man, that was nice. I knew when there was one-to-go and I knew when I could ride.”

The Crusher Kid is no stranger to the Sarver, PA dirt track. The reigning track champion already has five wins and two second-place finishes of seven total Super Late Model events at Lernerville Speedway in 2018.

“This one is for my dad and my grandparents,” continued Norris as his victory began to sink in and he became overwhelmed with emotion. “I grew up coming here and used to sit right there (grandstands outside of turn four) with my grandma… I can’t say no more. Thanks to all of the fans, sponsors, family, and Dan Bauman for giving me that cushion down there. We’re alright.”
Norris held off multiple charges from 2017 rookie of the year Devin Moran throughout the 30-lap shootout.

“Track condition and track position is everything,” said Madden. “Congratulations to Norris and his team.”

$1.00 per person
You must be 18 years with proper ID to enter, or accompanied by a parent or legal guardian. Each individual who will be in the yard is required to sign a insurance waiver to be in the yard.

Bring Your Own Tools

Carts available for hauling on the lot. We DO NOT allow you to bring torches.

No Warranties or Guarantees, Expressed, Written or Implied, are given on any parts.